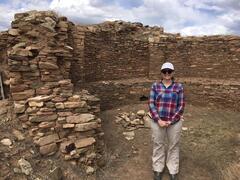 Sandra Zarzycka was a Master's student (2018-2020) who used GIS and landscape datasets to evaluate the hydrologic and agriculture potential of the landscape around archaeological sites in southwestern Colorado. She is working on turning her research into a manuscript for publication Her previous research as an undergraduate was on the geochemical sourcing of ocher in which she used both ICP-OES and ICP-MS to differentiate various ocher sources in WY and was published in the Journal of Archaeological Science. She is currently working for the Bureau of Land Management as an archaeologist near Bear's Ears National Monument in Utah.

Andrew Gillreath-Brown was a Master's student (2014-2016) modeling paleohydrology and its impact on settlement in the Mesa Verde region at small sites near Goodman Point Pueblo in southwestern Colorado. His research integrates environmental modeling and hydrology to study the spatial variability in soil moisture across a watershed. He has published one paper his master's thesis in PloSONE and is working on a second. Andrew's previous research during his undergraduate studies in anthropology at Middle Tennessee State University concerned manufacture and function of turtle shell rattles during the Mississippian Period in the southeastern United States. Andrew has presented his research at the Society for American Archaeology and the Society of Ethnobiology as well as several regional conferences.He was awarded the Barbara Lawrence Student Paper Award at the 2016 Society of Ethnobiology Conference. Andrew is currently attending Washington State University for his PhD and working on publishing his masters thesis research.

Andrea Cloutier was a Master's student (2014-2016) with a BA in Anthropology from UNT.  For her masters thesis research, she studied how gardeners' choices about their yard landscapes can minimize the contrast between developed and undeveloped land uses and mitigate habitat fragmentation. She interviewed gardeners associated with three organization, Native Plant Society, Texas Master Naturalists, Master Gardeners, as well as a small sample of gardeners from the general population about the types of plants they had in their yards. Since each group had a different mission, the proportion of native and "eco-friendly" plant species varied significantly depending on whether the group envisioned yards more as part of the built landscape's "architecture" or an extension of the natural environment.
Joshua Bova and Christina Kenny (2015-2016) were undergraduate students in Geography who worked on two projects involving Denton's urban forest. They evaluated how geology and land use change has impacted tree canopy. The research was published as an ArcGIS Story Map. They also analyzed the effectiveness of Keep Denton Beautiful's tree giveaway program in terms of its coverage across the city and among Denton's citizenry. Their research has been presented at the Southwest Division of the Association of American Geographers (SWAAG), where they won 1st place in the undergraduate paper competition and 2nd place in the undergraduate poster competition.
​

Amy Hoffman received an MS in Geography from UNT in 2011. Her Master’s thesis focused on dietary trends of Ancestral Puebloans at Goodman Point Pueblo in southwestern Colorado just before the depopulation of the area around AD 1300. By studying over 14,000 animal bones she compared the availability of animal resources at Goodman Point Pueblo to other nearby villages. Amy was awarded the Society of Ethnobiology's 2013 Barbara Lawrence Award. During her time at UNT Amy was a teaching assistant for Archaeological Science and Environmental Science. She is currently a community college instructor.
​
See also work with Dr. Wolverton and his students.